“It is a time machine that moves from the force of the past of archaeological excavations, to our present of crisis and sedated violence, and to the future of scientific research, which closes the circle to the remote past of the origins of the Cosmos”.

The event, which has its center in the Octagonal Hall, is a sort of journey through time, led by Europa, a mythological and symbolic character interpreted by Maddalena Crippa: a great Mother who represents our continent and our culture . Europa is the present, a place of conjunction between the past, represented by archaeological sites, and the future, represented by the dome of Daphne and the particle accelerator. Europa expresses herself with ancient words, from Seneca to Bhagavadgita and Rutilio Namaziano, and contemporary words, which refer to the transformation of our culture and the building of new identities.

The sign of the past is still strong and indispensable, from the bottom of the now underground road of Crypta Balbi, in audio and video connection, from another time, a man, played by Gabriele Portoghese, wanders among the excavations of our buried city, and finds , as in a dream, the spirit of Giasone (Jason), a defeated hero.

At the Colosseum, bloody circus and "simulated" theater of war with real deaths, Valeria Almerighi is the Furia (Fury), who threatens Europa with a terrible revenge evoking the fall of Palmyra and the killing of her Guardian, Khaled Assaad, by the hand of ISIS. In the Roman Empire, the city was the gateway between the West and the East, today it is conquered and destroyed, plundered and reduced to pure merchandise.

Under the dome of Dafne, at the National Laboratories of Frascati, next to the particle accelerator, Gabriele Benedetti interprets Tempo (Time). He is impatient, he bites the brake, he wants to go on, he clashes with Europa, he goads her, he dances with words, he makes everyone dance like particles, accompanied by a drummer near him, and a bass player in the Octagonal Hall. 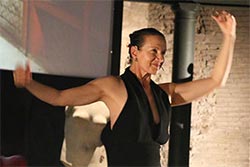 EUROPA
"Come to me, I welcome you
old mother speechless
come, I stutter
while I lean a cigarette for a moment
with wet saliva filter, dirty with lipstick, I wait here, underneath my house
come get me, let's go to the pizzeria." 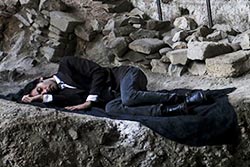 GIASONE
"running away I crossed the rivers and the seas of Europe, and now they are finally on a pile of rubble, in the bottom of the fund ... I spent my life fleeing ... from uncle, from kings, from crimes, always one step away from the power that I have never conquered …" 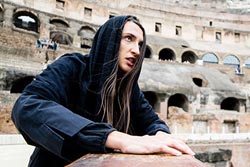 FURIA
" because you are you, you are the world of betrayal, you are the rules you have imposed on us
of sex and female soul
the rules of an effeminate civilization
sassy, shameless
we destroy them with fire and sword" 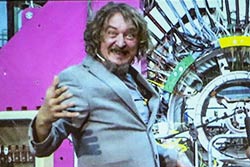 TEMPO
"I am the time that destroys the universes
…I dance, while transfiguring between the empty fluctuations of poor Kasimir with blows of one atmosphere
I would like to make it cheerful and in the quantum darkness I wrap myself up."

Places of the performance 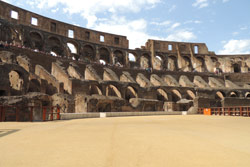 Located in the archaeological heart of Rome, the Flavian Amphitheater, or more commonly Colosseum, was erected in the first century AD. C. at the behest of the emperors of the Flavia dynasty. The Colosseum, a so-called colossal statue that stood nearby, has welcomed, until the end of the ancient age, shows as great hunts and fights of gladiators. It is in fact the largest amphitheater not only of the city of Rome, but of the world. Symbol of the splendor of the empire, the Amphitheater has changed its face and its function over the centuries, offering itself as a structured space but open to the Roman community. 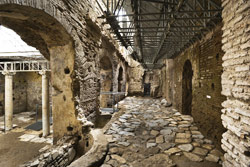 The Crypta Balbi Museum is the result of the first major urban archeology project developed in Italy and aimed at recovering an entire block, in a serious state of neglect, of the historic center of Rome. Thanks to the diachronic approach that guided the excavation investigations, all the phases of life that have shaped the urban landscapes through the centuries have been investigated. The material evidences help us to retrace the history of the block from the first houses of the Republican age, to the birth of the great complex of the Theatre and Crypta, erected by Lucio Cornelio Balbo in 13 BC, through the transformations from the late ancient age to our days. The Crypta Balbi Museum, so closely linked to the archaeological area where investigations continue, is a real laboratory for urban archeology, which daily contributes to increase the wealth of knowledge on the history of the city. 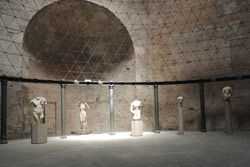 So-called for the shape of its plant, square outside but octagonal inside, connected by angular semicircular niches. The dome is an admirable example of the conquests of Roman architecture for its umbrella form. It is part of the Baths built between 298 and 306 AD by Massimiano in honor of the Diocletian Emperor. In 1929 the Octagonal Hall was chosen for the realization of a Planetarium that from the day of its inauguration, October 28, 1928, held the record of the largest planetarium in Europe, thanks to the large artificial mesh of the dome and the Zeiss projector, the extraordinary machine donated by Germany to Italy, to partially repair the damage of the First World War. The works carried out by the Superintendency of Rome restored the original appearance of the thermal hall, after dismantling the Planetarium and during the renovation of the Roman National Museum. 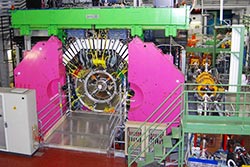 Built in 1955, the National Laboratories of Frascati (LNF) were the first Italian research facility for the study of nuclear and subnuclear physics with accelerator machines, and are the largest research laboratory of the National Institute of Nuclear Physics (INFN) , the public body for theoretical, experimental and technological research, in the field of subnuclear, nuclear and astroparticle physics. The LNF have been engaged for years in the dissemination of scientific culture with numerous programs aimed at students, teachers and enthusiasts of all ages, from Italy and abroad, in order to arouse attention around the scientific and technological research of the Institute and foster a constant exchange between the research world and society.