Among the main novelties of the new document there is the elimination of the limit of the GARR Consortium duration, which was previously set on 2040. This is an important step in the direction of long-term sustainability of a digital infrastructure already recognised as unique and enabling for the entire Italian research ecosystem, especially in a turning point, such as the current one, with the launch of the initiatives financed under the NRRP, where GARR and its community are among the protagonists. Thanks to these new projects and with the creation of the GARR-T network, with a capacity of multiples of Terabits, Italy will have one of the most advanced infrastructures in Europe and will be an international point of reference.

Furthermore, looking to the future, the new statute gives clinical and biomedical research institutes belonging to the Ministry of Health the possibility of joining GARR as members. There are currently 58 sites of biomedical scientific institutes (IRCCS) and veterinary research institutes (IZS) connected at high speed to the national network, thanks to an agreement between GARR and the Ministry of Health, active since 2005. 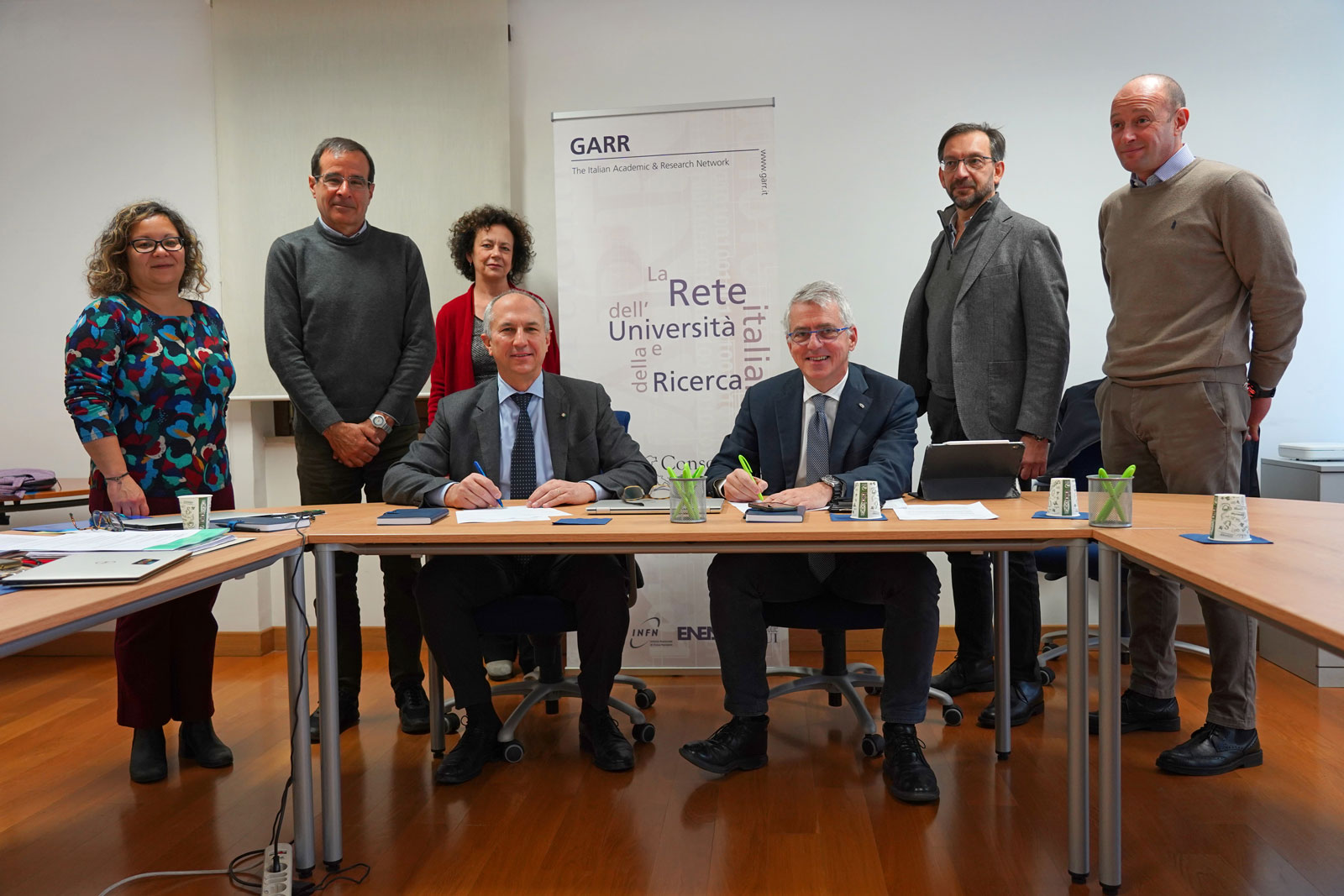 The signature comes together with the celebration of the twentieth anniversary of the Consortium GARR, the association that manages the Italian research and education network. The first document of association was signed on 13 November 2002 by the founding bodies CNR, ENEA, INFN and the CRUI Foundation representing all the Italian universities with Angelo Scribano as the first President. Over the years the membership has been expanded to include other important national research institutions such as INAF and INGV.

“Today's signature is particularly significant” declared GARR President Maurizio Tira. “On the one hand, it establishes the strategic role of GARR within the research community by extending its duration without time limits. On the other hand, the statute recognises the growing importance of clinical and biomedical research institutes in the national scientific landscape and considers their increased needs in the management, sharing and analysis of large datasets and data archives. Research is becoming increasingly interconnected and interdisciplinary and needs to use common resources by sharing the same digital infrastructures and services".

Green light for the National Plan for Open Science

Sharing ideas and success stories at the GARR conference 2022

The 2022 GARR Conference was once again back in a in-person event, hosted by the University of Palermo from 18 to 20 May.

The European project Skills4EOSC (Skills for the European Open Science commons: creating a training ecosystem for Open and FAIR science), for the creation of a pan-European network of competence centres to disseminate a real culture of open science, through the development of methodologies, activities and training resources to accelerate the updating of European researchers and professionals in the management of scientific data, has started.

TNC22 in Trieste: a few more days to the European networking conference

TNC22, the European networking conference co-organized by GARR and the GÉANT research network is just around the corner. This year it will be held in Trieste from 13 to 17 June.

Registrations for the GARR Conference 2022 are now open

Registrations are now open for the GARR Conference, that is taking place from 18 to 20 May in the Engineering Department of the University of Palermo.

The connection with GÉANT is now 2 times faster

From 30 June the connection capacity to the European research network GÉANT has doubled, going from 200 to 400 Gbps.

The second edition of "S-légami! Open Access - User's Guide for Researchers", a user's guide for researchers, has been published online. The publication is the result of the collective work of the APRE members' Working Group dedicated to Open Science, composed of representatives of libraries and research offices of several Italian universities and research centres.

Resources for the community